Carrying only the required minimum is literally "playing with fire." The tests, using a simulated galley fire, revealed that a 2.5-lb. extinguisher in the hands of an inexperienced user lacked the capacity to extinguish the fire-no surprise when you consider that the average discharge time for a 2.5-lb. canister is nine to ten seconds. The National Fire Protection Association (NFPA) has issued extinguisher recommendations that go beyond the Coast Guard's minimum requirements. Not only the number, but the location of your extinguishers is critical-if you can't get to an extinguisher when you need it, it's worthless. You shouldn't have to travel more than half the length of the boat to reach it.

If that's not practical, an alternative is to step up to the next larger extinguisher size. Spend the few extra dollars for a tri-class (ABC) extinguisher instead of settling for the less expensive BC unit. Consider a BC unit for the engine room: it leaves less residue on electrical equipment and machinery, and it costs slightly less. What's the worry?

You might not think you need to worry too much about fire on a boat. After all, you are literally surrounded by water. But fire is a very real threat, not only to your boat, but to you and your passengers. Today's fiberglass/composite boats burn very quickly, and produce large volumes of toxic smoke that is equally as dangerous. Below are a few tips on fire safety from BoatUS Magazine, along with a few claims reports from BoatU.S. Insurance that highlight how quickly events can get out of hand. Knowing what to expect, and what to do are critical if you expect to effectively fight a fire. Each year you need to ensure that your fire extinguishers are in proper working order, and that everyone who boards the boat knows where they are. 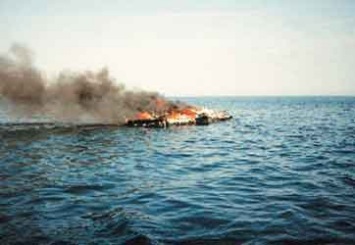 The owner and his two friends were nearing the last leg of a long trip from Yorktown, Virginia to Watkins Glen, New York aboard a 46' sport fisherman that he'd bought barely three weeks before. They were making good time across Oneida Lake when one of the crew left the fly bridge to go below. He quickly reappeared on the fly bridge: "We've got a problem," he informed the captain, " smoke!" The captain immediately brought the engines to idle and one of the crew tried very briefly to extinguish the fire. Within a minute or two, he as overwhelmed by fumes and had to abandon the effort. After trying unsuccessfully to send out a Mayday on the VHF, the captain ran to the foredeck, set an anchor, and hailed a passing boat by waving a life jacket. Meanwhile, a volunteer fireman saw the smoke from shore and dispatched a fireboat. By the time the fire was brought under control, the boat was destroyed.

Later investigation determined that the electrical panel was the source of the fire. The captain's urgent Mayday call conveys the danger of all fire outbreaks on boats. Unlike fires ashore, where there are usually several escape routes to safety, there are few places on a burning boat to hide from the heat and noxious fumes. Add to that the anxiety of standing above many gallons of explosive fuel and the choice to sink or swim (literally) becomes even more, well, problematic.

Time is critical with any fire, but when one occurs in the confined spaces of a boat it is imperative that every move made by the crew be the correct move.

BoatU.S. Marine Insurance claim files consistently confirm that a crew that reacts initially with confusion and indecision is likely to panic as the fire spreads.

Success and failure depends on understanding the fundamentals of fire classification, and providing the most efficient fire extinguishers in the locations where they are most likely be needed.

Learning Your ABCs of Fire Classification

Not all fires should be treated alike. The source and location of a fire will determine which extinguishing agent should be used for maximum effect. Many people learn at home, for example, that throwing water on a stove-top grease fire (Class B) will cause a violent spattering reaction and spread the burning grease elsewhere. Matching the agent to the fire begins with an understanding of how fires are classified:

Conversely, extinguishers with gaseous agents ( CO2, Halon, and Halon replacements FE-241 and FM-200), which react with the surrounding oxygen, aren't as effective in a cabin because the gases are often dissipated before the fire is extinguished.

The ABC units have the drawback of often ruining equipment, but because the priority is on safety and the overall effectiveness of the extinguishing agent, the American Boat & Yacht Council (ABYC) recommends that ABC multi-purpose extinguishers be used in most instances on boats under 65'. The ABC extinguishers not only reduces any confusion about what to use and where (saving time), but also covers the possibility that, for example, any Class B fire that spreads from the stove to the curtains (Class A) can be fought with the same extinguisher. 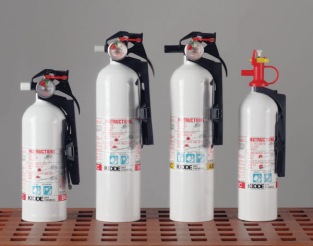 Coast Guard minimum equipment requirements vary with the size of the boat, type of propulsion, whether operated at night or in periods of reduced visibility, and in some cases, the body of water on which it is used. Boats carrying passengers for hire have additional equipment requirements.

For more details on how many and what types of equipment you must have aboard your boat, request a copy of the free brochure, "Federal Requirements for Recreational Boats", from your BoatU.S. Marine Center, the BoatU.S. Foundation, or from the Coast Guard Consumer Hotline, 800-368-5647.

Fight a Fire Yourself If and Only If:

A Subtle, but Costly, Distinction

A 42' powerboat was cruising offshore when a crew member reported a strange smell coming from the engine compartment. The owner grabbed a dry chemical extinguisher from the galley on his way to the enclosed compartment, opened the access door, and was immediately driven back by smoke. He tried to direct the stream of dry chemical inside the compartment, but he could not see beyond the smoke to locate the source of the fire. By then the fumes had also engulfed the main saloon and he was driven back. From the cockpit he saw flames coming out of the engine compartment's starboard ventilation ducts, so he directed another dry chemical extinguisher into the duct openings; the fire died momentarily but quickly resumed and grew rapidly. It soon became apparent that the vessel would have to be abandoned. It burned to the waterline (claim 9708770C).

The same dry chemicals that are so effective in a boat's cabin, aren't much use when a fire breaks out in the engine compartment. The reason has to do with how the two types of fires are fought.

Accounts of engine fires typically began with a warning - a burning smell, a loss of engine power, or even smoke trailing after the boat. If someone then opened the engine hatch to check out the trouble, he or she was usually overwhelmed immediately by flames and smoke.

Fires need two things: fuel and oxygen. Opening an engine compartment hatch to look for a fire is like throwing gasoline on hot coals; it fans the fire with a rush of fresh oxygen.

Fixed Systems in the Engine Room

Overall, the most efficient fire protection system is the safest. The majority of fires begin in the engine compartment for numerous reasons:

For many years, Halon was recognized as the most effective fire fighting agent available. It was quick to extinguish all classes of fires and was particularly safe and effective for use near expensive electronic equipment because it left no residual damage. And, it was safe for both occupied and unoccupied spaces. It was then determined that Halon posed a significant threat to the environment by contributing to the depletion of the ozone layer, and as of January 1, 1994, no new Halon could be made in the U.S. However, recycled or previously made Halon is still available for purchase, so you don't have to dispose of an old Halon unit. It only poses a danger to the ozone if it is used or develops a leak. As long as your unit is in good condition and not leaking, it's safe to keep on board.

With the phase-out of Halon 1301, the search for a replacement resulted in the development of a number of "clean" fire suppression agents. Both FE-241 and FM-200 have been shown to be effective, safe for people and equipment, and environmentally friendly. Although both agents do pose some threat to the environment, it is considered to be substantially less than that of Halon. Their characteristically rapid extinguishing performance is considered by most to mitigate the detrimental effects of fire. Both agents' relatively short atmospheric lifetime (somewhere between 7-42 years) assure minimal direct contribution to global warming. When choosing which system is best for you, keep in mind that FM-200 is considered to be safe for use in occupied spaces, whereas, FE-241 is not as safe, but is significantly less expensive. Both require more agent by weight than Halon 1301 did, so your storage requirements for the extinguishers may increase. Both are Factory Mutual (FM) and USCG-approved.