The Risk of Carbon Monoxide

A couple in Michigan arrived at their boat last October, started the gas generator, turned on the boat's electric heater, and set to work on a few end of the season projects. While they were working, carbon monoxide (CO) from the gas generator began creeping quietly into the main saloon somewhere down in the bilge.

Without a CO alarm, there was no way that the couple could have been aware-or even had the tiniest hint - that the deadly gas was mixing with the oxygen in the boat's cabin. CO is colorless and odorless, and it produces initial symptoms-drowsiness, headaches, nausea, or dizziness--that aren't especially alarming.

The unsuspecting couple soon "fell asleep," and would have died had it not been for the early arrival-almost two hours early-of their son. He quickly shut off the generator, opened ports, and phoned the rescue squad. They were extremely lucky; most CO claims have a much sadder outcome.

An investigation afterward concluded that the CO had come from a drain plug in the generator's muffler that had worked loose and lay in the bilge. The report also noted the lack of a CO detector aboard, which wasn't a surprise.

Of a dozen or so recent claims for CO fatalities or near fatalities in a boat's cabin, the lack of a CO detector is the only thing that all of them had in common.

CO can enter a cabin from many different sources, according to the claim files: from a hot water heater; from a galley stove; from the "station wagon effect"-exhaust from the boat's exhaust; from a generator; and even from other nearby boats. There have also been several injuries from people swimming under swim platforms when an engine or generator was being operated.

Certainly it is important to recognize the symptoms of CO poisoning: headaches, drowsiness, and nausea. With most of the BoatU.S. claims, one or more of these symptoms were present, but victims did not recognize the danger they were in.

It is also advisable to inspect the engine and generator for leaks in the exhaust system and to avoid, or try to avoid, the many different situations that could bring CO into a boat's cabin.

That isn't easy. Besides the station wagon effect, accidents have been traced to wind direction, proximity to a dock or seawall, boats rafted together, an open hatch or port, a canvas cover, or combination of several causes.

It isn't unusual after an accident for an inspection to spend many hours, or even days, trying to ascertain how CO got into a boat's cabin.

While guarding against the many possible sources of CO is certainly advisable, the most reliable safeguard is a CO detector. As of August 1, 1998 the American Boat and Yacht Council (ABYC), the organization that writes the voluntary standards for recreational boats, began recommending that all boats with enclosed accommodation areas and a gasoline generator or a gasoline inboard propulsion engine have a CO detector installed.

Diesel engines are not included because they are much less likely to produce deadly levels of CO. The recommendation that CO detectors be installed on new boats is great news for anyone who will be buying a new boat, but what about boats built before August 1998?

One reason that ABYC may have been slow to recommend the use of CO detectors may be their reputation in the past for emitting unnerving false alarms periodically. You could almost count on a CO detector made prior to 1992, the older "single point" alarms, to sound whenever they detected even the slightest trace of CO.

Since a whiff or two of CO is likely to drift into a cabin several times a day, the frequent alarms were an ongoing nuisance. After 1992, however, manufacturers began making more technically advanced units that use "time-weighted averaging" to greatly reduce the number of alarms.

By averaging the CO over a period of a few minutes, these newer alarms will not sound unless they repeatedly detect CO.

Some of the newer units can even do things like disengage the generator if CO is detected. A proper marine CO detector, incidentally, will have the UL 2034 marine mark, which means it was tested by Underwriters Laboratories standard 2034.

ABYC does not say where on the boat a CO detector should be located. The gas, which is about the same weight as oxygen, tends to dissipate evenly in an area and isn't any more likely to be found up near the ceiling or down by the cabin sole.

As a practical matter, placing an alarm at eye level allows you to easily monitor any meters or warning lights on a unit.

Sleeping areas, main saloons, an enclosed fly-bridge, and anywhere else people spend time are candidates for a CO detector. Areas that should be avoided include near hatches or doors where fresh air might distort readings. Dead air spaces-corners-should also be avoided.

While the older alarms were often a nuisance, the improved technology means that when a newer alarm sounds it should be investigated.

CO that drifts in and out of a cabin can be dangerous, since the effects of CO are cumulative and can build up gradually in a person's bloodstream over hours or even days before it reaches critical levels.

This is true even if when the person breathes fresh air periodically; the CO remains in the bloodstream. How quickly the CO builds up is a factor of the concentration of the gas being inhaled (measured in parts per million [PPM]) and the duration of the exposure.

The half-life of CO is approximately five hours, which means that it takes five hours for the level of CO in the blood to drop to half its level when exposure was terminated.

There is also some recent research challenges traditional thinking that the effects of CO poisoning are transitory. Studying 96 victims for one year beyond their exposure, researchers found over 25% showed evidence of brain damage 12 months after exposure. These long-term CO injuries can include apathy, memory loss, inattention, and depression.

How Much CO is Too Much (in Parts Per Million)

CO Concentration at the Source

What's Wrong With This Picture 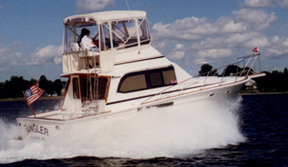 Shortly after she bought her 33' Egg Harbor, Terri Parrow, Vice President of Internet Operations at BoatU.S., took an action photograph of the boat as it went zooming by near Solomon's Island, Maryland.

The photo (left) turned out well, with a blue sky, puffy clouds, and lots of exciting spray.

The more she studied the photograph, though, the more it seemed that something was wrong. Then it dawned on her that the ship's ensign--the flag on the stern--is flapping forward, toward the two people on the flying bridge, Aren't flags supposed to point aft?

The canvas on the fly-bridge had just been added and when the flaps were closed exhaust from the boat's twin 340 hp gasoline engines was being sucked back into the cabin and onto the fly-bridge (the "station wagon effect). After seeing the photo, Terri made some changes.

First, she cruises with the forward canvas flaps and hatch on the foredeck opened slightly to keep fresh air flowing throughout the fly-bridge and cabin. And she also replaced one the boat's two CO detectors, which had been inoperable.

These two simple changes have saved her a lot of potential headaches, or worse, whenever the boat is underway.