Bilge Pump Systems — It's All In Your Head

A bilge pump often is considered little more than the "silent butler" below decks - taken for granted as a dutiful, undemanding servant that does the job at hand. When it's time to buy one, we go to the store, pick out a pump that says 2,000 gph on the package, hook it up, turn it on and we get 2,000 gph pumped over the side - right? Wrong. Boaters are cautioned that simply taking at face value the advertised capacity rating of a bilge pump is not enough. The pump is only one component of a system in which each part MAKES work as well as DOES work. Unless you take into account the effects of all the parts on the system's output, you'll be relying on guesswork to adequately equip your boat. 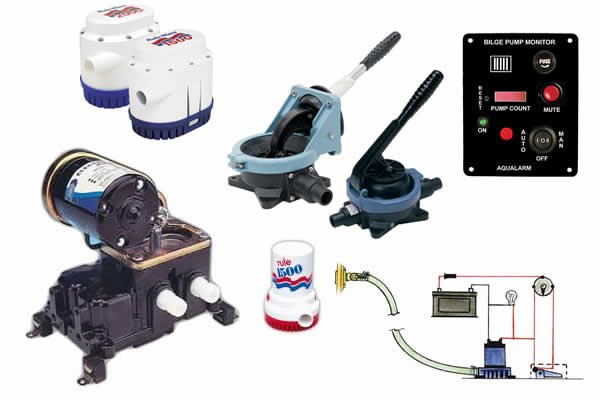 There are four important choices to make about your bilge pump system: which pump, which hose, which thru-hull fitting and where to place the discharge opening to best serve your needs. Knowing how each.part of the system works independently and together is the key to making the best choices for your boat.

In Foundation Findings #13, "Bilge Pumps- On the Level," the Foundation showed that bilge pumps fitted with hoses move considerably less water than the capacity numbers on the pump boxes suggest. Also during our testing, we noted that the type of hose affected output.

To obtain more precise data on how well installed pump systems work, we contracted Dr. T.C. Scott at the University of Virginia's Department of Mechanical and Aerospace Engineering to conduct performance tests on various combinations of pumps, hoses and thru-hull fittings. Here is a summary of his findings:

Two Heads are More Work Than One

To be conversant about bilge pump systems, you need to know about "head," which may be broadly defined as resistance the pump has to overcome. There are several sources of head.

First, "static head" is the distance between the top of the bilge water and the highest point in the system, usually the discharge opening in the side of the boat. Static head increases as your pump removes bilge water and decreases as the bilge fills. It remains constant if the bilge fills at the same rate the pump empties it. If you have the choice of where to put your discharge, install it as low as possible to minimize static head, but not so low as to allow water to siphon into the boat through your bilge system.

"Friction head" is resistance related to a variety of factors, including roughness of the inner walls of the bilge pump hose, diameter of the hose and thru-hull fitting, hose length, and flow rate. Even water temperature and contaminants like oil can affect friction head. In simplest terms, increasing friction head has the same effect as increasing static head.

Taken together, the static head and friction head comprise "system head," which is what the pump has to overcome to get the water out of your boat.

Bilge pumps have finite limits in terms of how fast and how high they will pump. A pump's "flow capacity rating" is the maximum amount of water in gallons per hour (gph) or gallons per minute (gpm) it can pump when it has 12 volts of power and no static head or friction head to overcome. As we pointed out in our first bilge pump article, this is the advertised open-flow, 0-head capacity, but not what a pump can deliver uphill through a hose. The system head level beyond which the pump cannot push is called its "shutoff head."

When the relationship between system head and flow capacity is expressed graphically, the resulting curve demonstrates that as head increases, flow decreases, which is why your pump discharge slows down as it empties your bilge. 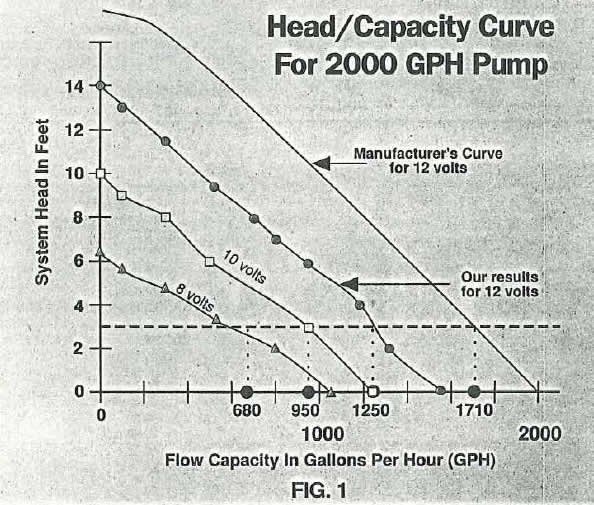 Figure 1 is a head/capacity curve for one of the pumps the lab tested at · 12, 10 and 8 volts. The horizontal line represents flow, or the number of gallons of water the pump moved in an hour; the vertical line tells you how much head the pump was working against at each flow rate. Though this pump has an advertised flow capacity rating of 2,000 gph at 0 head, with 12 volts, you can see that it actually pumped about 1,500 gph. And, though its advertised shutoff head is 18 feet, it actually reached only 14 feet. Both shutoff head and capacity are reduced as voltage drops.

To give you a rough idea of what this pump will do against a 3-foot system head, we drew a dotted line across the graph at that level. Read the adjusted flow rate at the point where the dotted line intersects the capacity curves. Note how dramatically the head plus lower voltage affect flow capacity. In the next sections, we'll take a closer look at how friction head works.

Just as you wish to choose the best bilge pump for the job, you'll want to think carefully about the kind of hose and thru-hull fitting you select because they add friction to your system. The lab evaluated six kinds of hoses between 10 and 20 feet long, and two thru-hull fittings to see how they affect the bilge pump's system output.

We tested four 3/4" hoses: smoothbore vinyl, smooth-bore reinforced vinyl, corrugated, and corrugated with semi-smooth bore. The thru-hull fitting was 3/4" plastic with an inside diameter of 7/16" and a length of 3.5".

The lab also tested two kinds of 1-118" hose: corrugated and 1-118" ·semi-smooth, both with a 1-118" plastic thru-hull fitting with an inside diameter of 7/8" and a length of 3.5". We did not request tests on 1-118" smooth vinyl hose because it is not readily available, though it can be special ordered in quantity. However, this hose generally is not used because it compresses easily.

As illustrated in Figure 2, the ribs in corrugated hoses offer the greatest resistance to flow because they create eddies near the hose walls that in effect narrow the channel the water flows through.

It may surprise boaters — it certainly surprised us — that a common 3/4" thru-hull fitting can add the equivalent of several feet of hose to the bilge system head. Figure 2 also shows how the water flow is reduced even further by the thru-hull opening, which in our tests had only about one-third of the cross-sectional area of the 3/4" hose and 60 percent of the 1-118" hose. Clearly, fittings with thicker walls are especially restrictive.

To bring all these facts and figures together, we created models based on the performance of smaller and larger pump-driven systems operating at 12 volts. We acknowledge that our test pump sample was small, but all performed below their rated capacities even before hoses, etc., were added. Figure 3 depicts our modeled results when we averaged the outputs of the two pump groups, then figured in friction head values from the lab testing for 10 feet of each type of hose and the appropriate thru-hull fitting, and a 3-foot static head. Figure 4 shows average point-by-point losses throughout a bilge pump system.

The laboratory confirmed our modeled predictions within 5 percent by running a real-life test using actual bilge pumps, corrugated hoses and plastic fittings. Base\l on our first tests and the controlled laboratory tests, then, the Foundation reiterates that the advertised capacity numbers for the bilge pumps we tested are higher than their actual output and dramatically higher than the output of a complete bilge pump system. 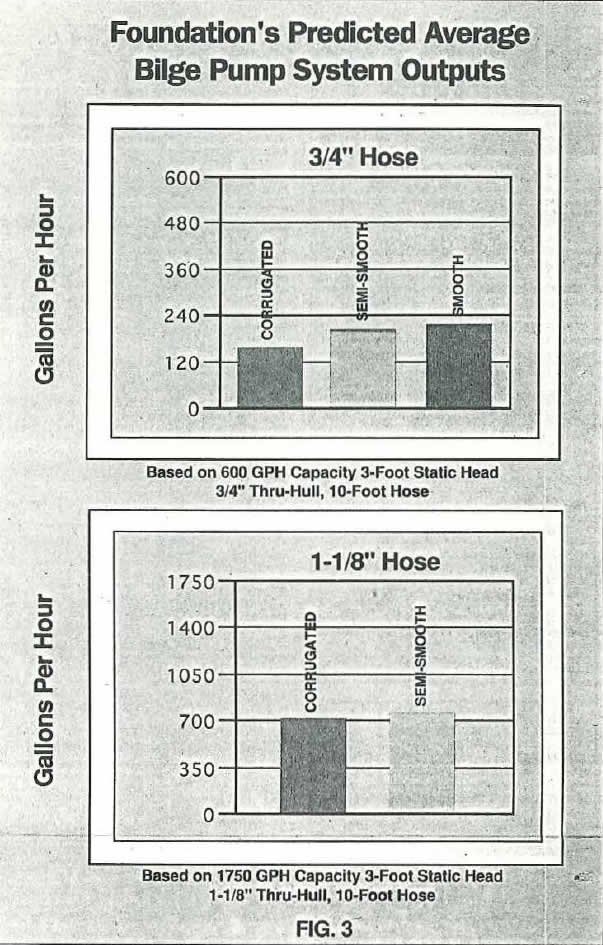 How do you put together the best - bilge pump system? Ideally, you'd buy the maximum size pump your boat and pocketbook could handle, fit it with maximum-diameter, minimum length thru-hull fitting and smoothbore hose, and you'd place the discharge as low on the side as possible without compromising safety.

Regardless of which components you select, we urge you to check your boat's bilge system frequently. Lots of boats flood and sink right at the dock - often because the system can't keep up. One final thing: Keep your batteries well charged - the "butler" is only as dependable as they are. 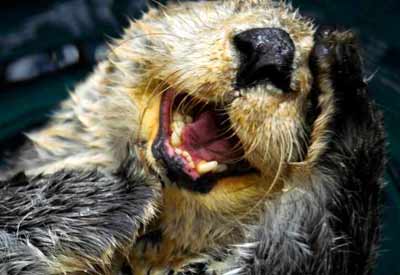 Boating Ecosystem: Learn more about what you can do to protect the environment. 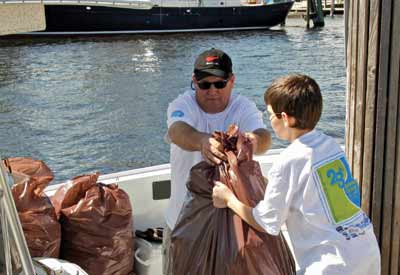 Beach and Waterway Cleanup Guide: Show your commitment to the local community.